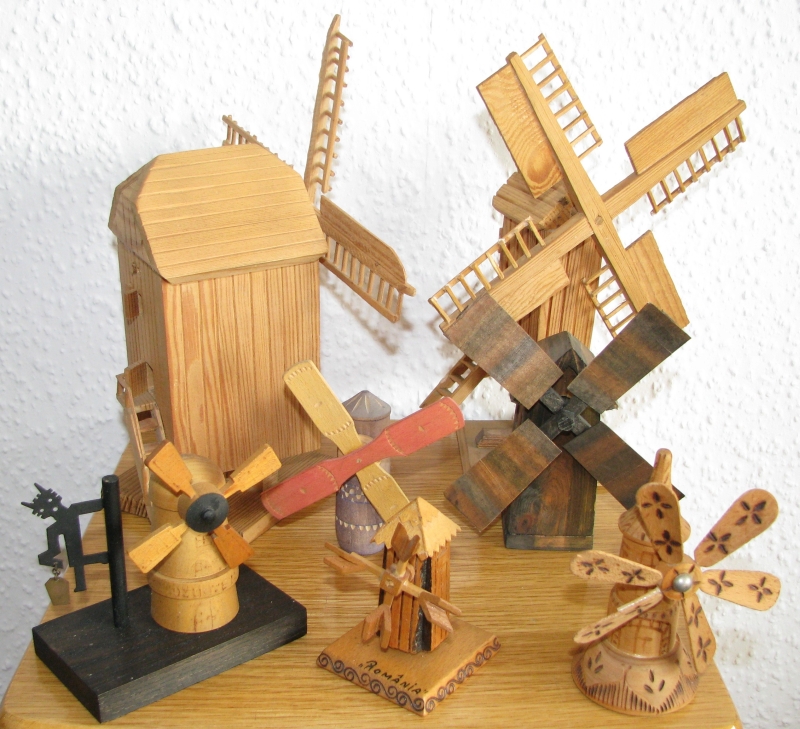 Wiesław Szkopek from Poznań began his adventure with windmills in the early 1970s.

He was ‘infected’ with a passion for windmills from engineer Feliks Klaczyński, a local amateur-ethnographer from Wielkopolska, who for several years documented the vanishing world of windmills and built their faithful copies.

It is worth noting that along with some members of his family, W. Szkopek was for many years an active tour guide of the Polish Tourist and Sightseeing Society in Poznań and Wielkopolska, hence the collector’s love and extensive knowledge of the history of the region.

Initially, Wiesław Szkopek collected newspaper articles and publications about windmills. It was only later that he became interested in postcards with pictures of windmills.

Over time, the collection has grown to contain more than 4.500 exhibits from most continents.

For more than fifty years he has collected various items which depict or represent a windmill.

The collection has thus developed, which includes, inter alia,

taken in the years 1966-1998; this collection has been gradually enlarged

(including more than 400 matchbox labels and approx. 400 beer labels and mats)

As a collector of such an extraordinary set, W. Szkopek has already been invited to present his collection at various types of meetings. He was, for example, requested to show part of his collection during I Meeting of Windmills Lovers on 18.09.2011, which occurred during the Milling Festival in Jaracz. A new version of the presentation was demonstrated at II Meeting of Windmills Lovers on 15.09.2013. On 28.11.2011, at a M.A. seminar at Nicolaus Copernicus University in Toruń, Faculty of Fine Arts, the Institute of Art History and Conservation, Wiesław Szkopek gave a more scientific overwiew of the object of his passion.

It was repeatedly suggested during such encounters that W. Szkopek should somehow make his collection available to a wider public. Accordingly, two ideas emerged at the same time – a well-known You Tube website and the Digital Library of Wielkopolska (Wielkopolska Biblioteka Cyfrowa), partly due to the regional nature of the collection, among others a rich collection of photographs of windmills from Wielkopolska.

Thanks to the support of the Kórnik Library of the Polish Academy of Sciences, since 2012, ‘Virtual Museum MY WINDMILLS’ (Wirtualne Muzeum MOJE WIATRAKI) has been available in the Internet as a publication of the Digital Library of Wielkopolska. The fotographs of collection of windmills are very intresting for many people. It has been visitedmore than 9.500 times until March 2020 .

During the conference ‘Audio-visual Archives of the 21st century’, held in Poznań on 11.27.2013, the publication of the collection ‘MY WINDMILLS’ in the form of a virtual museum in the Digital Library of Wielkopolska was presented as an attempt to make the private collection open for public access.

The desire to bring his collection online inspired the collector to work out a more systematic and coherent system of classification of the whole material. The following list of subsets was accordingly compiled while the collection was digitalised with a view to making it available in the Digital Library of Wielkopolska:

The value of the collection lies not only in the presence of interesting and varied exhibits, but also in the fact that some of them (mainly photographs and postcards) document the vanishing world of windmills, thereby acting as excellent iconographic documents.

Available on the Internet, they contribute to the popularisation of issues related to historic architecture, landscape and the problems of the protection, conservation and adaptation of historic industrial buildings and structures.

Information on the location, history and current use provided for a number of presented windmills substantially enhances the quality of these documents.

The collection has been still enlarged and digitised on a regular basis, so that updates of the ‘Virtual Museum MY WINDMILLS’ can be periodically posted in the Digital Library of Wielkopolska – http://www.wbc.poznan.pl/publication/251856.

As of March, the publication numbered more than 5.200 pages (slides) in total.

Interestingly W. Szkopek has been still collecting background information on subsequent windmills depicted in photographs and postcards. This information is mostly gathered from witnesses, hence the collector’s documentary work is perhaps the last chance to make it last. It is worth noting that this collection contains also dozens of unique photographs of already non-existent windmills. Further tens of windmills immortalised in photos are currently in poor condition or even in ruins. These photos are thus perhaps the last traces of their existence.

Until 2013, W. Szkopek was a member of the Windmills of Wielkopolska Association.

Since February 2017, the publication „MY MILLS Virtuales Museum” is available on the website of Wiesław Szkopek: – https://e-mojewiatraki.com/. As of 03.2020, the site was visited over 43.000 times.